You are here: Home / Project Outreach / Case Study Visits / If you build it…they will come
Pin It 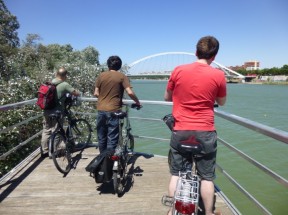 cycle BOOM has been on tour recently, taking in the cycling sites in Munich, Germany and Seville, Spain. We would like to take this opportunity to thank our host cities and all those who took the time to teach us more about the approaches taken to promoting cycling.

One of the key lessons we have brought home with us is, “If you build it, they will cycle”. Both Munich and Seville have invested heavily in recent years in providing networked and well maintained cycle routes that intersect their cities. The mantra being that cycle infrastructure only increases cycle numbers when it is part of a larger and well developed network of lanes, allowing cyclists to navigate their way throughout the city using uninterrupted dedicated cycle infrastructure.

Seville has not only shown how to design and operate such a network, but it has provided a benchmark in speed of delivery. In 2005 Jose Garcia Cebrian (Head of Urban Planning and Housing at Seville City Council) believed that the bicycle was the answer to the city’s notorious traffic congestion. He, along with consultant Manuel Calvo, not only designed the current impressive network, but they delivered it (initially 70km) in less than 2 years! Seville now boasts over 140km of separated cycle lanes – and they are a joy to use, one never has to leave the easily recognisably green lanes to access almost everywhere within the city and its surroundings. The rapid delivery and the joined up nature of the scheme is responsible for Seville increasing its modal share of cycling from 0.4% to 7% (and rising!) 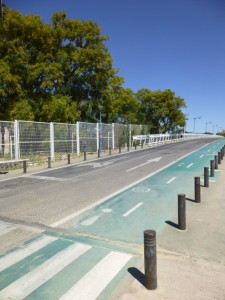 Munich is no less impressive in its drive to encourage ‘more Merida and less Mercedes’ on the streets of the city. A modal share for cycling of 19% and growing for this European city with an engrained automotive culture (the home of BMW) is as impressive as it is surprising. This success is down to a similar approach to Seville – the belief that cycle infrastructure must be joined-up, it must serve the entire city and be designed and implemented in much the same way as an underground metro system.  cycle BOOM marvelled at the sheer volume of bicycles and the range of cyclists (including a significant number of older people). 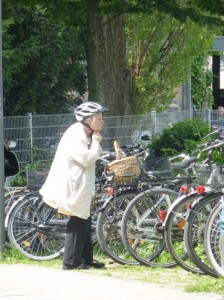 These cities share a common vision, to increase the modal share for cycling, and they also share the belief that to achieve this aim and to offer up cycling as a genuine alternative to cars the infrastructure needs to be designed as a network, it needs to serve all of the city and its inhabitants, and most importantly it needs to be realised. Like they say – “If you build it…”

Philip Black is a Research Assistant on the cycle BOOM research project at Reading University. Contact him at p.a.black@reading.ac.uk

Welcome back to the cycle BOOM blog. After a busy crescendo to the project, with our conferences in … END_OF_DOCUMENT_TOKEN_TO_BE_REPLACED