You are here: Home / Meet the team / Heather Jones

Researcher-Co-investigator, University of the West of England 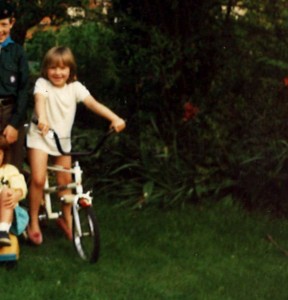 My memories of cycling as a child concern mainly the frustration of being the youngest, slowest and therefore repeatedly last in races around our street. There were a few exceptions when I imagine the others had been told to let me win.

Other memories include the excitement of growing in to my sisters longed-for blue bike, lifts with our bikes on the milkfloat and endless games of towing someone on a skateboard behind a bike.

It was whilst living in Switzerland in my early twenties when cycling took hold for me. One of the major advantages was that after a night out the bike could easily be abandoned either at the start or part way through the journey home if the necessary co-ordination was lacking. This was then followed by a game of hunt the bicycle to recover it the next day. I took cycling home with me to the UK and whilst it isn’t always the stress-free peddle I had Switzerland it is a big part of how I’ve come to know and appreciate my city.