You are here: Home / Cycling and Wellbeing / Positive Spin
Pin It

Cycling for people with dementia may not immediately appear an obvious idea but having heard about the Positive Spin programme run by Cycle Training UK  I was keen to find out more. I arrived in North London in late June, with the weather reflecting the post-Brexit politicking down the hill in Westminster, full of turbulence and bluster. I was there to meet with David Dansky and Clare Morris from Cycle Training UK and to observe one of their funded weekly sessions in Finsbury Park.

Cycling instructors Erika Severini, Robin Smith and Tim Woolrich were waiting on the netball courts near the café with a wide selection of cycles. The hand cycles, mountain bikes, step-thru city cruisers, folding bikes, trikes and side-by-side cycles offer a variety experiences, depending on confidence and ability, both for people with a diagnosis of dementia, members of their family and carers. But given the highly unseasonal weather and threats of heavy rain, would anyone attend?

First to arrive were Granville and his daughter Carlotta. Having attended previously Granville quickly settled into a side-by-side bike with a trainer and set off while Carlotta continued to get instruction on learning to ride a bike. The enthusiasm and enjoyment was obvious on both their faces, Granville moving onto trikes and cycling independently around the courts. 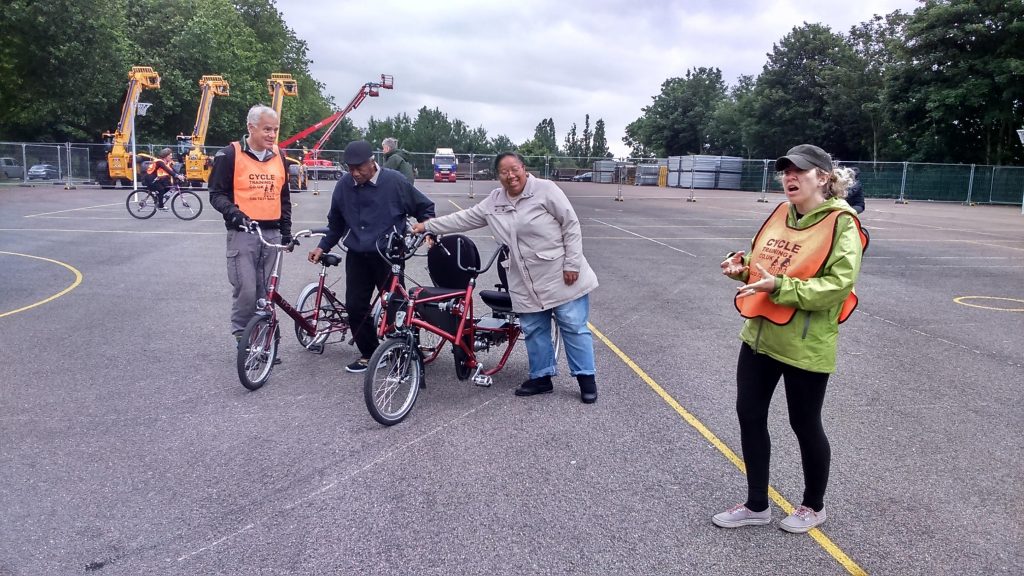 Soon there was a steady flow of arrivals including couples from a recently established local support group for people with early onset dementia. People cycled, chatted and watched with friendly support and encouragement from the instructors. 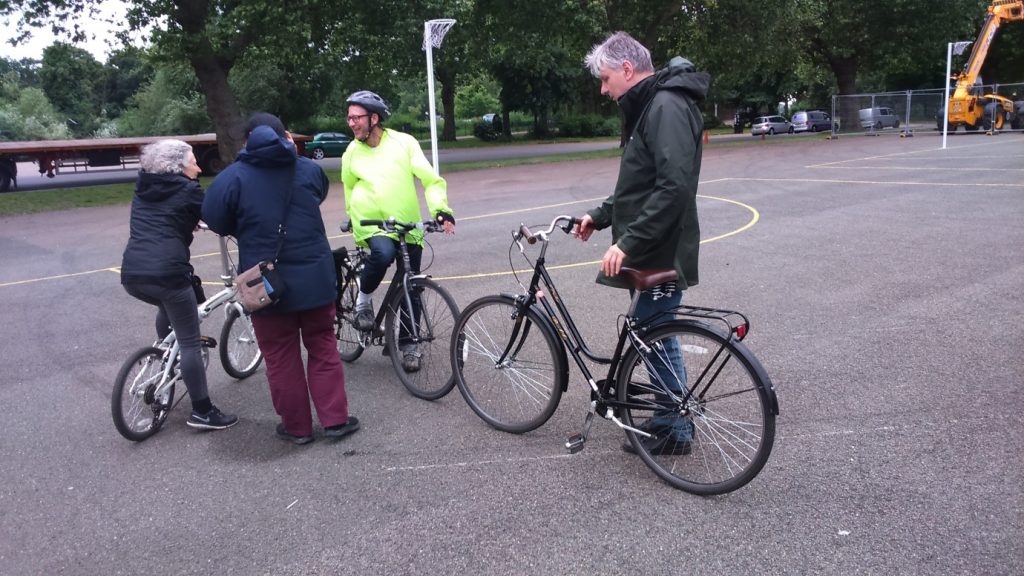 David and Clare explained how the instructors used the National Bikeability standards to identify the skills and competence of the participants and their potential progression. This ‘assessment in the moment’ was used rather than pre-determining what participants might be able to do based on an existing medical diagnosis, freeing the participants up to experiment and learn. During the session this process appeared to work very well with the instructors making suggestions about bikes to try and tips on cycling techniques. Cycle Training UK explain that cycling is a skill which is learnt and carried out through procedural memory, which is often unimpaired in people with a diagnosis of dementia. These participants looked happy and relaxed on their cycles and in some cases seemed to move more freely than when on foot (although not with the dramatic difference demonstrated here by a person with Parkinson’s). 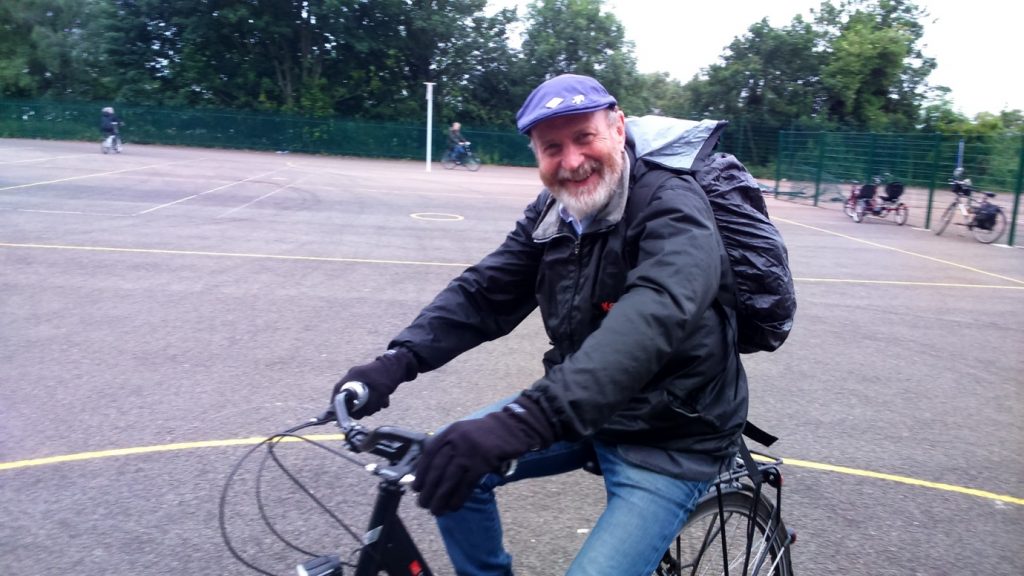 After trying out a variety of steads, cycling in circles and following painted lines a group of the more confident cyclists set off for a ride around the park on the wide paths and largely traffic free roads. This gave us the opportunity to explore the park and chat while riding side-by-side. I spoke to John who had been diagnosed with early-onset Alzheimer’s and who could no longer drive due to problems with his vision. As a life-long cyclist he was delighted to be able to maintain this important dimension of his life. On previous weeks some of the group had ridden with instructors on quiet roads to nearby Clissold Park.

Finally, after an hour and a half, the group gave up on the worsening weather and made their way to the nearby café to shelter from the rain and continue their conversations. It was clear to see why the programme has already expanded from Lambeth to Hackney and why David and Clare are keen to extend Positive Spin to more areas nationally. Their initial evaluation has identified a wide range of benefits. In addition to non-weight bearing exercise, improved cycling skills and confidence to use a cycle for transport participants experience freedom and control in moving around independently. As well as the intrinsic pleasure in the moment of cycling and the respite from symptoms this brings for people with dementia and their carers there have been opportunities to enjoy positive social contact with a variety of people, including reminiscence about past cycling.

Claire Wheeler, a dementia advisor for the Alzheimer’s Society reported the effect on Granville of previous Positive Spin sessions: ‘Granville is a lovely man – quiet and contained – who doesn’t often join in conversation and very rarely initiates it. But when his daughter mentioned the bike ride, Granville’s face lit up and he interrupted her to tell me about how when he was a boy he had ridden from end to end of the island of Barbados. Granville was clearly delighted at being able to get back on wheels and it was great to learn of an aspect of his growing up that we had not heard of before. Positive Spin really does tick all the boxes!!’ Positive Spin has recently been further recognised by nomination for the National Transport Awards Excellence in Cycling and Walking category.

Cycle Training UK also take bikes to care homes and community centres in Hackney and Lambeth so people can have fun cycling at their home. When I met David and Clare they had just heard that they had won funding from a Transport & Health Dragons’ Den event to provide side-by-side quad bikes with electric assist in Hackney through community transport. This will further extend the possibilities for older people experiencing cycling and provides another exciting and innovative model that could be spun out nationally.

Internationally other successful cycling initiatives for people with dementia use rickshaws, tandems and static exercise bikes so the many ways of engaging with cycling and the potential benefits are an exciting area for further development. As Claire Wheeler enthused ‘As a dementia advisor I must admit to having been somewhat sceptical about the idea of Positive Spin – cycles and people with dementia not immediately striking me as being an altogether happy combination. I am, however, now a convert!’

Many thanks to David, Clare, the rest of the Cycle Training UK team and Positive Spin participants for making me so welcome on the day.

David Dansky can be contacted directly via: david@cycletraining.co.uk

Welcome back to the cycle BOOM blog. After a busy crescendo to the project, with our conferences in … END_OF_DOCUMENT_TOKEN_TO_BE_REPLACED