You are here: Home / Project Outreach / Conference Reports / Rad Aufschwung: cycle BOOM goes (back) to Germany (via Hereford)
Pin It

In the past two months I have had some time out from analysing cycle BOOM data to attend two conferences and present emerging findings from the study. When you are immersed in large volumes of data, it can be a useful reality check to step away and give some thought to the audiences of research outputs and what debates and priorities we need to feed into.

The first event I attended was the Women and Cycling Conference, held this year in Hereford. Organised by a group of people working towards gender equality in both sports-recreation and everyday cycling, it had a different feel to academic conferences I am accustomed to. The Programme included presentations by urban planners, campaigners and academics on a range of projects promoting cycling among women in different parts of the UK.

My talk focused on the cycling life histories of some of the women who had participated in cycle BOOM and in particular on how their engagement with cycling had been affected by life events and transitions, and how this related to their expectations of cycling in later life. I took part in two workshop sessions, the first discussing how to address the under representation of women in roles in the cycling industry, and the second, on how to support parents cycling with their young children. I was impressed and encouraged by the determination and creative thinking demonstrated in both sessions.

The second event I attended, at the beginning of June, was the International Scientific Conference on Mobility and Transport hosted by the Technical University of Munich. This conference attracted researchers from many universities around Europe, North America, Asia and Australia who presented research on a broad range of topics related to transport and mobility in urban areas. My session was titled ‘Designing Urban Systems for Different Needs’ where I discussed the temporal and spatial characteristics of older cycling in the Greater Bristol area, and the tactics older people use when accomplishing journeys by bike. There was a lot of interest from the audience on the (velomobile) methods we used to collect data – this is still a quite a novel approach in the mainstream of transport research – and also on the potential of e-bikes to extend cycling in older age. This discussion was carried through to the coffee break with one researcher expressing an interest in doing similar research in her home town in Australia, where she thought aggressive driving behaviour undermined an inclusive cycling culture.

For transport researchers visiting other cities is always an opportunity to observe how mobility may be performed differently. After almost three years of researching cycling and ageing, I instinctively notice the presence or absence of the older cyclist wherever I go. My impression was that central Munich provided spaces that were conducive to riding a bicycle in a less harried way and cyclists were more diverse in terms of age and gender compared to Bristol where I live. I leave you with a shot I took of one Munich’s diverse bicycle traffic participants while she made her way along one of the city’s many cobbled squares. 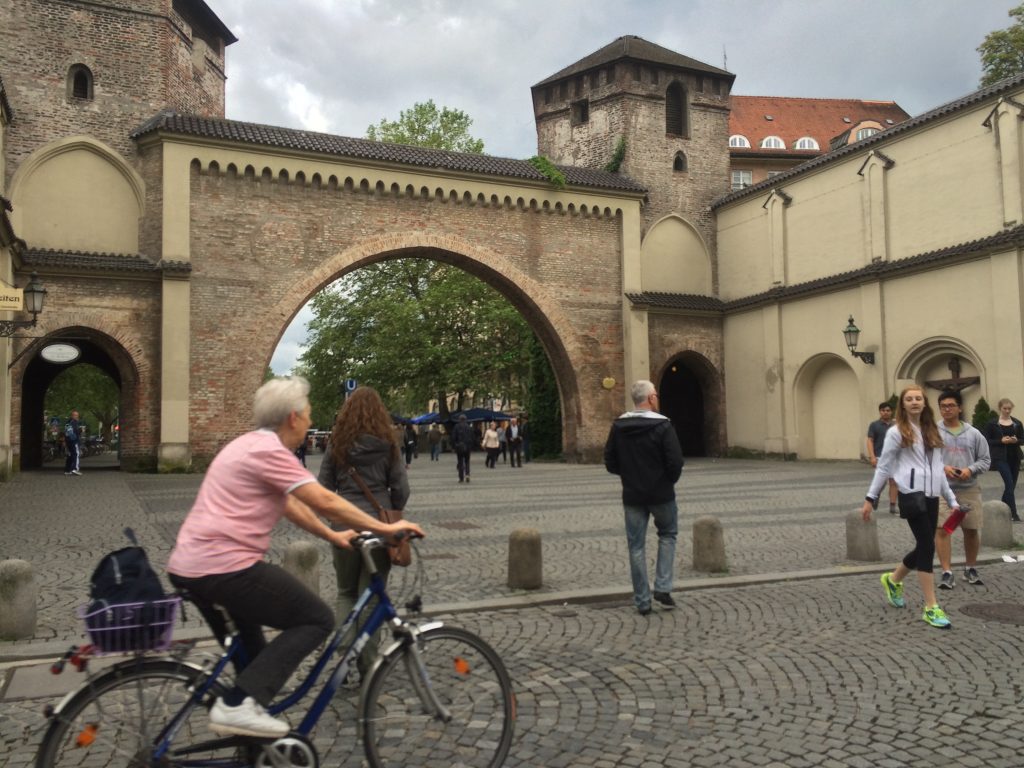 Heather Jones is a Research Assistant on the cycle BOOM research project at the University of the West of England (UWE). Contact her at heather6.jones@uwe.ac.uk

Welcome back to the cycle BOOM blog. After a busy crescendo to the project, with our conferences in … END_OF_DOCUMENT_TOKEN_TO_BE_REPLACED