You are here: Home / Uncategorized / The potential for the return of an endangered species – the older cyclist
Pin It

This month’s blog is written by cycle BOOM Co-Investigator, Kiron Chatterjee, and provides a valuable insight into the current state of older cycling in the UK.

When we have told some people about our research they have not been able to hide the view that we are wasting our time. They claim older people in the UK don’t cycle and they don’t want to cycle. They say why not put your effort into those that are willing and able to cycle – the younger generation.

However, participants in our research like Paul Taylor and Kathryn Johnson make you realise there are people who enjoy cycling in their ‘golden years’. But will these always be a minority?  One part of our research is to examine existing data to see what it can tell us about the endangered species, the older cyclist. We have used this data to answer questions such as how uncommon is it for older people to cycle, under what circumstances do they currently cycle and what might encourage more of them to cycle in the future. On the surface what we have found seems to confirm the scepticism about older people cycling but scratch the surface and a more positive message emerges.

We have produced an infographic to show what we found. You can download a full colour PDF of it here.  Infographics aim to present complex information in a quick and simple way. So perhaps I should just tell you to look at the infographic and stop my blog here!  But for those happy to continue reading I’ll talk through what the infographic tells us and discuss some of the implications.

It is true that compared to other countries such as Denmark, the Netherlands and Germany, there is a low level of cycling amongst older people in the UK. While cycling levels are not high for any age group in the UK, they are much lower for those aged 50 and over. This is not the case in the other countries mentioned where cycling is actually more common in older age. This is a firstindication of the potential for increasing the amount of cycling in later life in the UK. 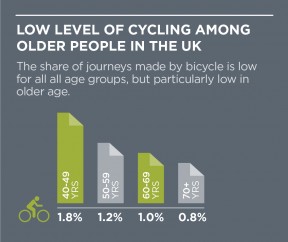 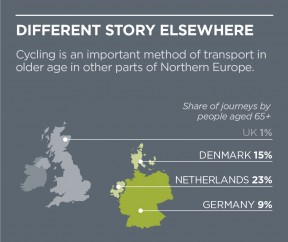 As we get older in the UK, cycling is no longer principally undertaken for getting to school, college or work, but for other reasons such as social activities. These trips are shorter in distance. This highlights that to support older people cycling the focus should be on making local streets more cycling friendly. Cycling investment in the UK has tended to concentrate on cycling to school and work (and the routes that are used for this) but this neglects the needs of older cyclists. The gender divide that exists in cycling in the UK applies to older cyclists as much as it does to younger age groups with older women less than half as likely to cycle. We know women in general live longer and have healthier lives for longer but they are not cycling very much during older age. It is also found they are less likely to get sufficient physical activity for good health than men. 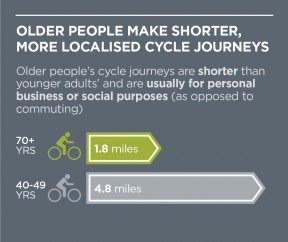 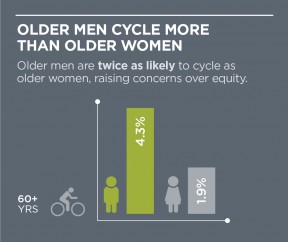 Turning to the reasons for low level of cycling in older age in the UK, it is evident that physical limitations and health barriers to cycling are higher amongst older people and confidence to cycle is lower. Whilst more than 1 in 4 older people have bikes, only 1 in 9 cycle of these regularly. That means there are a lot of older people who could presumably cycle but do not. What might encourage them to do so?  Nearly half of older people say that if there were more dedicated cycle paths they would cycle (more). The bicycles themselves could also play a role. In the Netherlands many older people nowadays use e-bikes. Greater availability and visibility of bikes more suitable for older people (such as e-bikes) could increase the numbers of older people cycling. 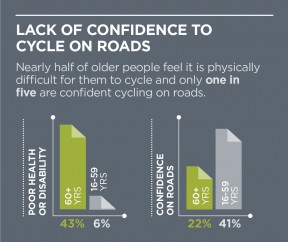 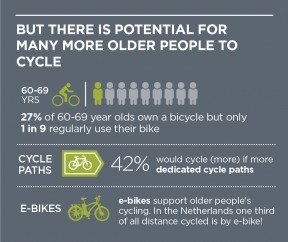 In older age groups in the UK the proportion of the population getting sufficient physical activity for good health is very low – regular cycling could contribute to improving this situation. Thankfully it is not just us that recognise this potential. London’s Cycling Commissioner Andrew Gilligan discussing the Mayor of London’s plans for cycling in the capital has said “What I want to see…is far more women doing it, far more older people doing it”. 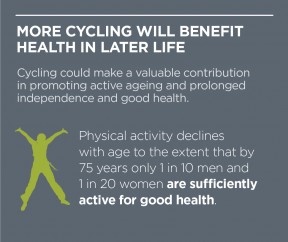 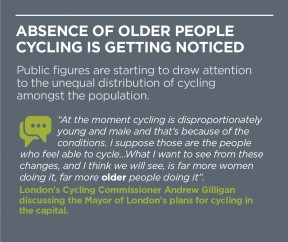 Kiron Chatterjee is a Co-Investigator on the cycle BOOM research project and Associate Professor in Travel Behaviour at the University of the West of England, Bristol. Contact Kiron at Kiron.Chatterjee@uwe.ac.uk

Welcome back to the cycle BOOM blog. After a busy crescendo to the project, with our conferences in … END_OF_DOCUMENT_TOKEN_TO_BE_REPLACED