You are here: Home / Uncategorized / The ‘Teardrop’ Explodes?*
Pin It

In an earlier blog we wrote about how researchers on the cycle BOOM team would need to recognise their positionality in relation to both the research setting and our research participants. That is, we need to accept and be transparent about our acknowledged interest in developing more supportive environments for cycling but not to let this interfere with the professionalism in the way we conduct our research and the truthfulness and robustness in interpreting our research findings. With this in mind, in this month’s blog, I reflect on my own position as a researcher and my experience of cycling in Oxford. Here I use the example of a negative encounter using a new piece of infrastructure. This encounter, and learning about similar encounters of others, forced me to reflect on the viability of moving outside of merely producing ‘objective’ knowledge about cycling to the validity of including my own subjective experience in the process of doing research.

When I started to work on the cycle BOOM project it was the first time I had cycled in Oxford for decades. Initially I was struck by the cycling culture, the sheer quantity and variety of people cycling – had I found a cycling utopia? I enjoyed my ride from the train station through the historic centre to the Brookes campus in Headington. I experimented with different ways to traverse the city and was surprised at how difficult it was to cycle on a direct east-west trajectory. As I became more familiar with cycling in Oxford I discovered some good but ageing cycling infrastructure, and I began to become more critical.

Like me, the majority of cycle BOOM participants I spoke to appreciated the convenience and enjoyment of cycling in Oxford city. However, they too raised questions about the quality of infrastructure for cycling, but more worrying, about the quality and safety of some of the recent investments in ‘cycling infrastructure’. One example is the Frideswide Square, a recent project to enhance this important gateway into the city from the west and the railway station. The scheme included some modifications at the junction of Hythe Bridge Street and George Street which is an essential link between Frideswide Square, the ‘entertainment quarter’ and the heart of the city. The so-called ‘Teardrop’ is a signal-controlled junction. Motor traffic travelling east must ‘continue left’ but cycles are permitted to continue straight on to George Street subject to waiting in the ‘Teardrop’ – a painted holding area – and then ‘giving-way’ to traffic travelling along Worcester Street in the opposing direction.

I conducted an observed ride in June 2015 with Pratima Mitchell, a self-confessed experienced cyclist. We rode through the ‘Teardrop’ as shown in the video below and afterwards I used the video of Pratima’s ride to interview her about her experience of cycling in Oxford.

In our discussion after the ride, Pratima drew attention to the Teardrop which for her is a vital route into the city:

Pratima: this is just a terrible junction, this is new and the highways people, really they have no idea how dangerous it is, a couple of the councillors are cyclists so they are, I hope they are, making a fuss about it… got to wait until the traffic on the left [Worcester St] has halted… THEN it is safe to cross I wouldn’t risk it even if it is coming slowly and there is a huge gap, I just wait… motorists are quite blind sometimes, they don’t really, they are not aware of cyclists unless they cycle themselves

Me: how do you feel [being in the teardrop]?

Pratima: …this is REALLY being exposed [indicates teardrop on screen]… if a car lost control… swinging round this corner you would be squashed

Several months after the interview Pratima decided to blog about her experience of using the junction. Pratima lobbied local politicians and, with the backing of local campaigners, organised an online petition. I and members of the Oxford cycle BOOM team were asked to sign the petition, and as concerned users of the junction, we duly did so. Then, ‘bless my cotton socks’, on a bright clear morning in February, while I was waiting in the Teardrop, I was struck by a car whose driver was turning right from Worcester Street into Hythe Bridge Street (see image below). I was shocked, although not surprised, and not physically hurt. The car was travelling slowly and the driver got out to check I was okay. He said he was not sure what had happened and asked what I was doing there, explaining that he didn’t expect cyclists to be waiting in the centre of the junction, that he hadn’t seen me or even been looking for obstacles in that location. He agreed to pay for the damage to my bike and we parted with a handshake. This was my first on-road collision in nearly 30 years cycling daily in Brighton, London, Bristol, Swindon and Gloucestershire although I’ve had a good few near-misses. 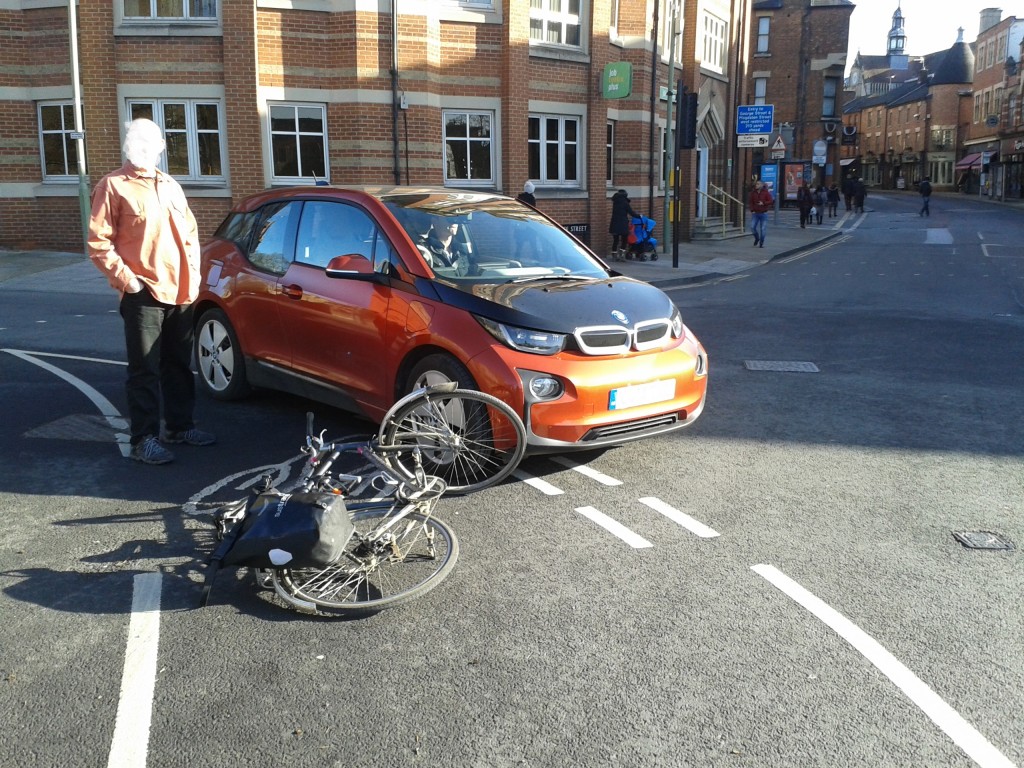 Driver examining where his car collided with me in the ‘teardrop’

I reported the incident to the Police but as I wasn’t injured they did not want to complete a Road Traffic Collision report. This meant that the incident would not be logged in the STATS 19 Road Accident dataset, which records accidents on the public highway and is used by local authorities to determine where changes to roads are required. Feeling that something should be done to improve the junction before a more serious collision occurred, I contacted those behind the petition and they soon enlisted Susanna Pressel, City and County Councillor for the area. Susanna has been pressing the Highways team to make changes to the junction, but as yet there is no news of any definite changes.

So how has this very minor collision affected me as a cyclist and researcher? Firstly, I feel more vulnerable as a cyclist generally, a feeling that something similar or more serious might happen even when I am conforming with the expected cycling behaviour. Secondly, I have lost confidence in much of the infrastructure (most often paint) supposedly designed to help and protect those on a bike. For me Oxford, although better than most places, is certainly not a cycling Utopia, it is questionable what progress is being made in promoting cycling when demonstrably unsafe schemes are being implemented and the voices of cyclists are not being responded to adequately.

Consequently, I feel more empathetic to existing cyclists nervous about cycling on the highway and people considering cycling who have concerns about their safety. Although many of the research participants I have ridden with have been more experienced and skilled cyclists than me, our research aims to engage more people with cycling and I feel I understand better the hurdles to starting or continuing cycling due to the perception of danger on the roads. Hopefully this ongoing self-reflection on my own cycling and the cycling of others in the setting of Britain’s ‘second cycling city’ will improve the quality of the cycle BOOM research and the usefulness of our findings. I’m relieved to have survived to tell the tale.

Ben Spencer is a Research Assistant on the cycle BOOM research project at Oxford Brookes University. Contact him at bspencer@brookes.ac.uk

Welcome back to the cycle BOOM blog. After a busy crescendo to the project, with our conferences in … END_OF_DOCUMENT_TOKEN_TO_BE_REPLACED