“One more bicycle” – these three words are the rallying cry for the community cycling campaign group Siclas.  I was lucky enough to meet with three of the founder members, during a recent trip to Colombia.

Siclas is based in Medellin, a city of 2.5 million people, located in the sub-tropical Antioquia region in northwest Colombia. Like many Latin American cities, Medellin is expanding, particularly at the urban fringes, where poor quality housing clings to the steep mountain slopes.

In recent years, Medellin’s administration has invested heavily in public transport infrastructure, including the now-famous metrocables [cable cars], to connect these marginalised areas to the Metro system and the rest of the city. 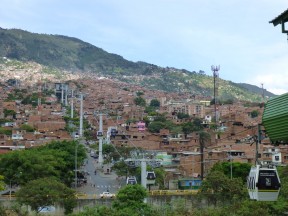 Siclas’ ambition is for bicycles to form part of Medellin’s public transit system; a point that they make very visibly (and loudly!) in a weekly urban Night Ride.  This sees around 4000 riders take to the streets between the hours of 8-11pm in a vibrant, exciting and sometimes controversial (ride organisers block key junctions to allow participants to pass) mass ride. 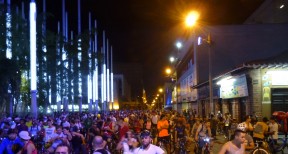 The Medellin Night Ride has parallels with the Ciclovías Recreativas ‘Open Streets’ programme. Under this initiative, parts of the city are closed to motor traffic for a few hours a week, creating safe spaces for people to walk, cycle, jog and skate.  The Ciclovía began in Colombia’s capital city, Bogota during the mid-1970s, and there are now 48 programmes in operation across Colombia.  Bogota’s Ciclovía, which regularly attracts around 1.2 million people, is credited with delivering annual savings of $13 million.[i]

The Open Streets concept is gaining traction globally as policy makers look to encourage citizens to engage in physical activity.  I had an opportunity to meet with one of the champions of the Ciclovía during my stay in Colombia and asked him to explain the idea behind the concept.  Gil Peñalosa, who helped develop the Bogota Ciclovía during his time as Commissioner of Parks, Sport and Recreation, is now Executive Director of the Toronto-based NGO, 8-80 Cities.

The central idea behind 8-80 Cities is quite simple, and involves thinking of an 8 year old you love and an elderly relative you care for. Ask yourself, would you be happy to send them into the city streets alone?  All too often, Peñalosa argues, the answer is no.  Despite recognition that non-motorised transport is a key part of sustainable development, particularly in emerging economies, streets can be hostile, car-dominated places, that frequently fail to cater for the most vulnerable users. 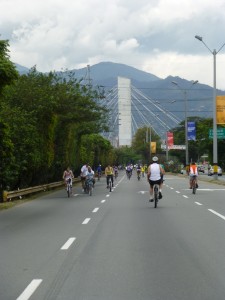 Using active mobility as a tool for more equitable development was a recurrent theme of the 7th World Urban Forum (WUF) which I attended (along with c.19,999 others!) during my stay in Colombia.  The week-long event, organised by the United Nations, is held every two years, and is dedicated to addressing urban development issues.

I attended a number of workshops where social or inclusive mobility was on the agenda, including a session organised by the Brussels-based European Cycling Federation (ECF) to promote the Worldwide Cycle Alliance (WCA). This membership network is designed to bring together national and regional cycling bodies and lobby bodies such as the United Nations, on behalf of cyclists around the globe.

I couldn’t resist posing a challenging question and, reflecting the aims of the cycle BOOM project, asked how the WCA might also represent the needs of non (or lapsed) cyclists. This provoked a lively discussion that, for me, highlighted the importance of better understanding the diverse needs of current but also potential cyclists in generating a global cycle BOOM.

Emma Street is a Co-Investigator on the cycle BOOM research project, and Lecturer in Real Estate and Planning at the University of Reading. Contact Emma at e.j.street@reading.ac.uk

Welcome back to the cycle BOOM blog. After a busy crescendo to the project, with our conferences in … END_OF_DOCUMENT_TOKEN_TO_BE_REPLACED