You are here: Home / Cycling and Wellbeing / Wellbeing and Cognition Cycle Trials
Pin It

The first wave of the cycle BOOM wellbeing trial has been very successful, with so far more than 20 participants completing the trial and 10 more to finish in the next month or so. Most of the participants that cycled for an 8-week period on a pedal bike or an electrically assisted (e-)bike indicated that they would continue to cycle.

But, I hear you ask, what was the impact on wellbeing and cognition? Cognition is defined as the mental processing of information and includes decision making, goal planning, reasoning, spatial awareness, attention, memory, and many more different complex operations that the brain engages in every day. We have some preliminary data from some of the computer-based tasks that we conducted to measure cognitive function (particularly something that we call executive function).

“Wheels of thinking”. Can cognition be improved by cycling?

We include a few measures of executive functioning in the battery of tests that we ask participants to complete before and after the 8-week cycling intervention to see if exercise can have an impact on cognitive ability. Predovan and colleagues (2012) investigated the effect of aerobic exercise on performance on a task measuring executive functioning. In this study, older adults completed a 3-month aerobic training intervention. This aerobic training occurred three times a week, for a one hour session each and was composed of stretching and cardiorespiratory exercises (fast walking and aerobic dancing). Participants’ performance on the task was compared before and after the intervention.

Predovan and colleagues found that aerobic exercise enhanced performance on the task and reduced the amount of time the participant needed to respond during the task. The authors concluded that aerobic exercise can enhance cognitive function, specifically executive function. It is likely that cycling has a similar effect on brain function due to increasing cerebral blood flow and allowing the brain to grow new cells (Heidi Johansen-Berg from Oxford University). Cycling may also have an additional effect through the participant gaining stimulation from the environment and interacting with the urban setting, other people and road users during their cycle rides. 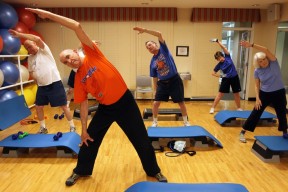 Our preliminary results of two measures of executive functioning suggest that there is some improvement in accuracy in the e-bike and pedal cyclists after the intervention and their reaction times are faster. The importance of our study including both e-bikers and pedal cyclists is to look at the effect of different levels of physical exercise AND stimulation from cycling in the environment. Some recent studies have shown that an enriched environment can enhance cognition as well as physical function (van Praag, 2000). Therefore, we expect the participants using the e-bikes for the 8-week intervention may improve in their cognitive function as well. The improvement, however, is expected to be less than that of the pedal cyclists who are gaining stimulation through the environment as well as an increase (compared to the e-bikers) of cerebral blood flow through physical exercise. This still needs further investigation and we need more control (non-cycling) participants to compare the cyclists to, so if you know someone who is not interested in participating in the 8-week cycling trial but would like to take part in the study, please let us know.

If you are interested in taking part in this study then please sign up via the following link: http://www.cycleboom.org/contact/participate/

Louise Leyland is a Research Assistant on the cycle BOOM research project at Reading University. Contact her at l.leyland@reading.ac.uk

Welcome back to the cycle BOOM blog. After a busy crescendo to the project, with our conferences in … END_OF_DOCUMENT_TOKEN_TO_BE_REPLACED