At the beginning of March I had the opportunity to return to the Netherlands for the first time in over 20 years. I accompanied an Urban Design field trip organised by the Department of Planning at Oxford Brookes University and had the chance to observe the many people using cycles in Amsterdam – and to take a few snaps of older people on bikes. I can’t truly say I can make any useful comparisons with my earlier experiences in the city as my attention then was not so focused on cycling – at that time my interest was Korfball!

My observations were opportunistic and possibly non-representative, with timings and locations very much determined by the schedule of the trip. I was mainly in the historic city centre but also travelled out a short distance, by bike naturally, to more recent residential areas in the former docks, including Java Island and Ijburg.

What was immediately striking was that there were lots of older people on bikes, and like those of other ages, they were wearing everyday clothes, including smart work wear – there was not a bike helmet to be seen. 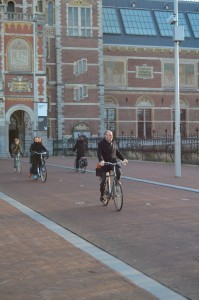 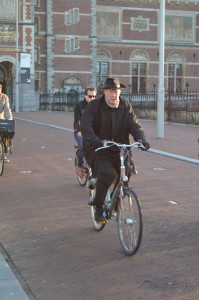 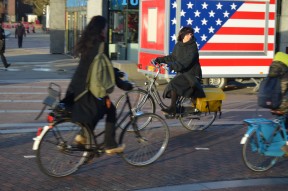 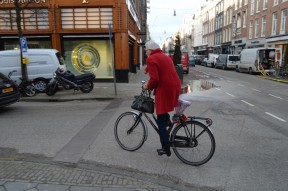 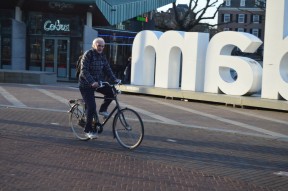 Most cycles were sit-up-and-beg city bikes, often with racks at the back (and/or front) for transporting items and people. Rear panniers were common and seemed semi-permanently installed, with large weather-proof flaps – ideal for popping shopping into. Bikes often had kick stands and integral locks, making leaving bikes for short visits to shops or cafes convenient. Spoke and chain guards were frequently in evidence to protect those everyday clothes. Often the bikes had built in, low maintenance hub brakes, gears and dynamo lights – but I also saw lots of small cheap LED lights at night, but little reflective or fluorescent gear. There were also folding bikes, including a surprising number of British Bromptons, and some of the hybrid and mountain bikes that are more common in the UK. 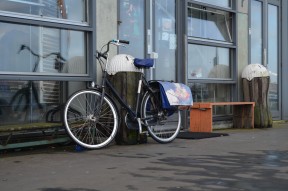 Example of a bike belonging to a woman in her 70s, Java Island, Amsterdam 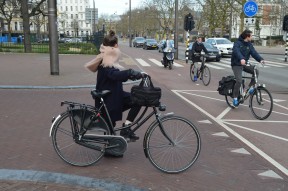 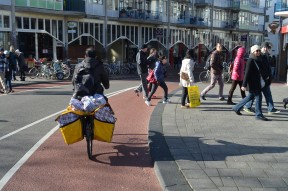 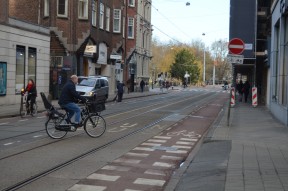 There were many opportunities for sociable cycling provided by the generous dimensions of the almost vehicle-free cycle infrastructure. I witnessed parents with (perhaps) adult children, friends of similar ages / couples all cycling side by side in a companionable fashion, at a leisurely pace and chatting. 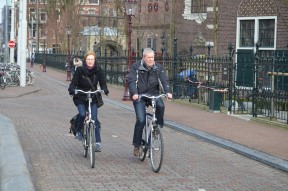 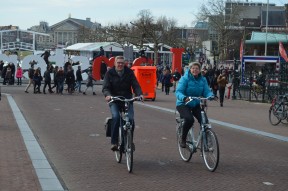 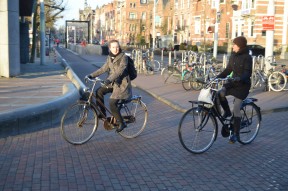 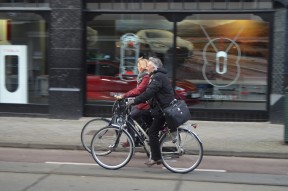 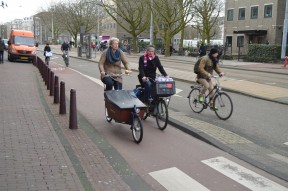 But Amsterdam wasn’t a complete cycling paradise – it was flat certainly, but cold and windy in exposed areas such as around the docks area of Ijland (also known locally as Iceland). Older cyclists also slowed considerably for the short sharp inclines on the historic canal bridges. Bike parking and storage was also an issue – both at home and in public spaces – our Amsterdam guide explained that she chose to travel to Centraal Station by bus rather than by bicycle because of problems with parking. Despite extensive cycle parking provided around the main railway station – including underground, above ground and over water – there is excess demand that even plans for underwater parking will struggle to provide for. This means that there are huge problems finding places and the cramped situation means that cycles are often damaged by other bikes. Cycle parking, some of it free, and often with workshops and mechanics on hand (aka fietsenstalling), was available across the city. 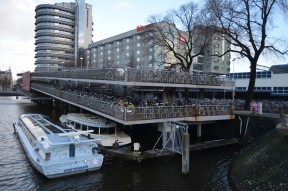 Cycle parking on land and over water, Centraal Station, Amsterdam 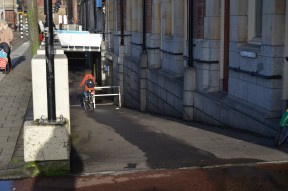 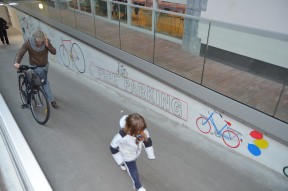 We hired 45 typical Dutch city bikes (apart from having the more familiar handlebar brakes rather than traditional back-pedal) to explore the city with the urban design students. My apprehension about riding with 3 groups of 15 students with massively varied experience, from all around the world, was misplaced – the cycling was a joy even for the very inexperienced riders. The only difficulties we had were getting used to the snorfiesters (motor scooters) suddenly buzzing past close by and an incident which perhaps reflects the frustrations of the local residents with the vast numbers of tourists on bikes in an unfamiliar city. An older male cyclist shoved three of our students, presumably in order to get past, as they were making their way along a cycle track in a residential area. One student came off her bike, she was unharmed, if a little perturbed. Unfortunately, I wasn’t there to do an impromptu interview with him to understand his cycling! 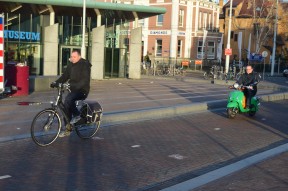 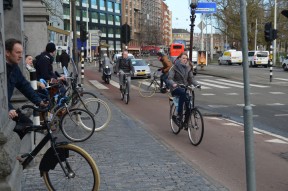 Watching the ‘street ballet’ of cyclists (cars, buses, trams, pedestrians and mopeds) negotiating busy spaces in the rush hour was fascinating. There were some close shaves which were negotiated with apparent insouciance by all parties. The use of hand signals by cyclists – for other cyclists and pedestrians – helped show intentions on occasion, but mostly it was variations of speed and line, combined with eye-contact that worked effectively. At some busy junctions there were also cycle specific traffic lights – with counters to show waiting time until the next phase, possibly helping to reduce frustration and red-light jumping. 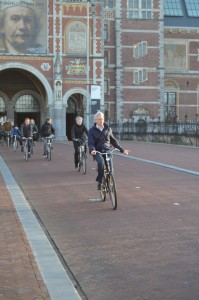 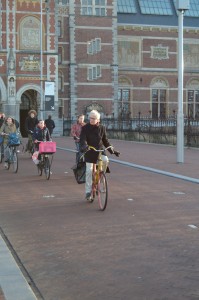 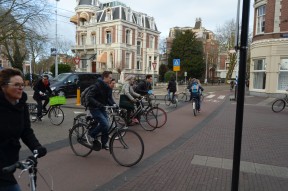 As you would expect, the rush hour appeared to be a more purposeful and generally less sociable experience. There was a very wide variety of people using bikes, from parents taking young children to school (often sitting or standing on rear racks) to older people. One person I spoke to who lived and cycled in Amsterdam found the focus of the cycle BOOM research difficult to understand. She explained that people naturally continued to use their bikes into their 70s and only stopped due to bodily restrictions. Certainly I didn’t observe obvious variation in speed or style of riding by age.

So, an all-too-brief look at cycling by older people in Amsterdam. Where free roll-on-roll-off ferries are provided for people using bikes and pedestrians to cross the docks, where a £6.5m pedestrian and cycle bridge provides links between new housing developments and parks and the city centre. But, more importantly, where using a bike is a normal, enjoyable, sociable, safe, quick and reasonably easy thing to do for all ages.

Click here to watch a short video of cycling in Amsterdam on a Sunday afternoon (Running Time: 3 mins 15 secs).

Welcome back to the cycle BOOM blog. After a busy crescendo to the project, with our conferences in … END_OF_DOCUMENT_TOKEN_TO_BE_REPLACED